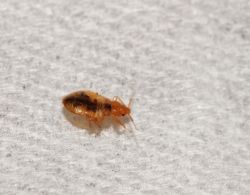 Bugs are small bedding bugs and bedspreads called bed bugs. They are reddish-brown and flat-bodied. They can hide in small cracks in bedding and walls, and prefer to live in hot, humid weather. Bugs are active at night and feed on human blood during sleep. They also produce a narcotic substance that makes a person feel numb. After a period of time, redness of the skin is accompanied by irritating itching that may cause allergies to some people.

Signs of bugs in the home

Bed bugs prefer to hide in the cracks in the rooms, as well as in the bends in the furniture and sheets, as well as behind the mirrors and sockets and other places that can not be detected quickly, knowing that the bugs reproduce very quickly, as the female bugs bleaching almost Five eggs per day, and thus may reach the rate of eggs in the lives of bugs to about five hundred eggs, and signs of the presence of this insect at home:

- Visibility of the insect with the naked eye, although the size of adult bugs equals the size of the apple button.

- The vision of the crust of empty bugs, because the larger the insect, it changes the crust on it.

- To see the dirt left by this insect on the furniture and walls, and this dirt takes a brown color lean to black.

- Signs of biting the skin.

How to get rid of insect bugs?

To get rid of bugs bugs you have these tips:

- Inspect the sewing holes in the bedding and cracks in the walls and furniture to search for the insect or its waste, which appear mostly in the form of points built on bedspreads or pillows, and to ensure that the bugs do not hide in the bed can be wrapping the family with a plastic cover tightly.

Three per month in the sun.

- The use of absorbent materials for moisture, because places where moisture is the best environments for living insect.

- If the bugs are found in the house, it is necessary to spray the house with pesticides and concentrate on the places where it is likely to be found, remove bedding and furniture under the sun, wash the sheets with hot water and dry it in the sun.

- The need to re-spray two to three times every two weeks to ensure the emphasis on the eradication of new hatching of eggs that are not affected by pesticides.

- There are some household articles and herbs that may contribute to the expulsion of bugs and keep away from the human during sleep, including camphor and mint oil and some tree leaves such as neem tree as well as concentrated chlorine and kerosene.