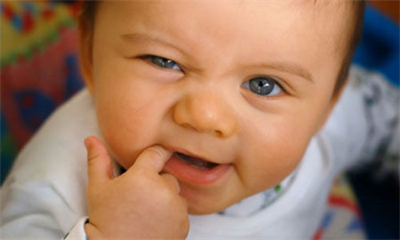 Teething symptoms in children: all the facts

Teething refers to the period in which the baby's first teeth start (also called milk teeth or deciduous teeth) to appear in the mouth. Typically, what happens when teething infants between six months and two years generation. While he has some children go through the process calmly and properly, for some, the teething can lead to severe discomfort and increased nervousness.
Teething symptoms in children: How do you know that this happens?

When occurrence of teething in infants can show the following symptoms:

Widgets put in the mouth and bite.

An increase in the secretion of saliva or saliva production.

Loss of appetite or food selectivity.

Rash on the cheeks or redness of the cheeks in the neighboring area of the gums where there is pain.
Not calm.

Tightening the ears, which may be a sign of teething symptoms in children or, alternatively, may indicate the presence of inflammation in the ears (When this happens, you must set an appointment with the pediatrician).

Teething in children is accompanied by fever, vomiting or diarrhea. If your child shows these symptoms, the doctor consulted.
How Tkhvvo of teething symptoms in children?

To relieve symptoms associated with nagging Baltsnin in infants, they tried to use the following advice:

To ease the pain, Afrckoa baby's gums with a clean finger or by the back of a small spoon and cool.
Let the child chewed chewing ring cold (but not frozen). Frozen chewing ring may cause damage to a handful.

Tried to use anesthetic ointment is sold without a prescription. Consult your doctor about ointments that can be suitable for it.
Let your child suck cloth (clean) moist and cool.

Avoid as much as possible the use of nonsteroidal ointments containing Abannzukain (benzocaine). This article is the active ingredient in many products to ease the pain of teething and sold without a prescription. Abannzukain linked to the phenomenon of a rare but serious and called blood Matimogloppinih (methemoglobinemia), which significantly reduce the amount of oxygen in the blood.
Issued by the US Food and Drug Administration (FDA) warning about Abannzukain which prevents the giving of products containing Abannzukain for children under the age of two years without the supervision of a professional person.