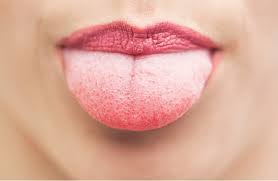 - Reasons that may lead to Zaorhma white cover is divided into two parts:

First, cover the natural tongue protrusions Kosaba hand known as papillae leads her with pneumonia and collect bacteria and dead cells among themselves to this white color, this may happen as a result of:
1. drought injury.
2. dry throat, "get rid of the dryness of the mouth."
3. Excessive use of alcohol, which may lead to injury of oral cancer.
4. overheating.
5. Smoking "effect of smoking on the health of your mouth."

Secondly, on the other hand, the cause of white spots on the tongue may be:
1 - a side effect of some medications.
2 - geographic tongue (is a type of inflammation of the tongue covered appearance as an aspect of the map).
3 - white spots linguistic leukoplakia, which sometimes is the beginnings of cancer.
4 - oral lichen planus, a chronic skin disease that affects the mouth may sometimes
5 - syphilis, a bacterial sexually transmitted infection, and various symptoms in the form of skin problems and may be affected by the tongue show.

When should you consult a doctor?

In most cases, white tongue coating, which does not mean much is harmless disappear brushing the tongue and drink plenty of fluids.
But. . .
You should make an appointment with the dentist; that was the problem, accompanied by other symptoms such as pain or if the survival of the problem without improvement in more than two weeks the situation.
From the above it is clear that. .
White coats the tongue, which may be the result of food waste that can be disposed of using dental floss and brushing the tongue well, bacteria, or dead cells. This disease may be something harmless and temporary and disappear over time, on the other side could mean the case of unsatisfactory, whether as simple as easy infection treatment or a more serious problem, such as cancer beginnings.

Diseases of the mouth and tongue White tongue